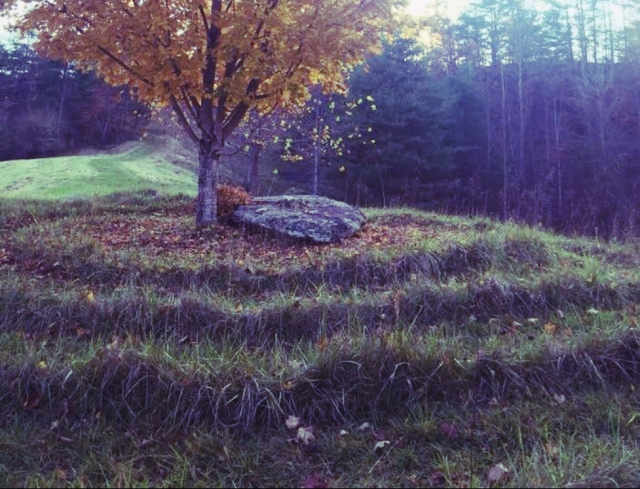 While many may think of labyrinths as “new age”, they actually predate Christianity and may be as old as gods and goddesses themselves.  The labyrinth has been used by seekers of truth, enlightenment and communion with spirit for thousands of years.  But what exactly are these ancient paths and how do we use them?

Let’s start with what a labyrinth is not, it is not a maze.  The design may be a spiral or may be made with twisting, winding paths,  but there is always one clear way in to center and one clear way out.  There are no decisions to be made, you just follow the path and eventually you come to center.   A maze is meant to be challenging and entertaining, while a labyrinth is meant for introspection or sacred journeying.  I’ve often heard the difference described like this, “mazes are for getting lost, labyrinths are for finding yourself”.

According to legend, the first labyrinth was created by King Minos of Crete.  The labyrinth was built to be inescapable and used to trap the Minotaur, the half bull, half man creature.  No physical evidence was ever found to substantiate this claim, but it is clear that this labyrinth was not intended for religious ceremony.  It may have symbolized a hell of sorts or inescapable prison of the mind.  This may be why there are a few people who believe labyrinths are dangerous and should be avoided.  However, as time passed, labyrinths became popular in Christianity.  One of the most famous labyrinths in the world is located in Chartres Cathedral in Chartres, France.  Part of the floor inlay, it dates back to the early 1200s.   A clear description of the use of these labyrinths in the church was difficult to find during my brief research, but it is plausible to believe they may have been used to symbolize a pilgrimage.  Recent years have brought a resurgence in the interest and use of this sacred path in both Christianity and other spiritual paths.

So what’s the purpose?  That depends on you and your beliefs, but most would describe the experience as having a spiritual purpose, with or without a specific religious aspect.  Each time I’ve walked a labyrinth was with a slightly different purpose or intention.  There are times that I set a specific intention prior to the walk and times I go in with a completely blank slate.  Sometimes I use the journey in as a way of releasing worries, in the center I sit with peace, and on the journey out give thanks.  When walking a labyrinth for remembrance, I would use the journey in for remembering the person.  I would sit in spirit with the person being remembered while in center, and again, would use the outward journey as a time for thanks.   Others may use the entire journey for meditation or prayer.  There is no right or wrong way to use a labyrinth, but respect should be given to others that you may meet on the journey.  Labyrinths are typically walked in silence and you may come upon individuals in front of you, behind you or who are walking opposite you.  Just as in the mundane parts of life, some people will be faster, some slower, so be accommodating to your fellow woman or man.  If you’ve never walked a labyrinth, I highly recommend it.  It consistently provides me with some of my deepest moments with spirit.

Trying to find a labyrinth?  Check your local public park spaces and church yards, you might be surprised and find one.  Another resource for those in the United States and Canada is labyrinthlocator.com

Like Loading...
This entry was posted in Sacred and tagged labyrinth, prayer, spirituality, walking meditation. Bookmark the permalink.

7 Responses to Walking the labyrinth